4 Most Common Causes of a Kitchen Fire 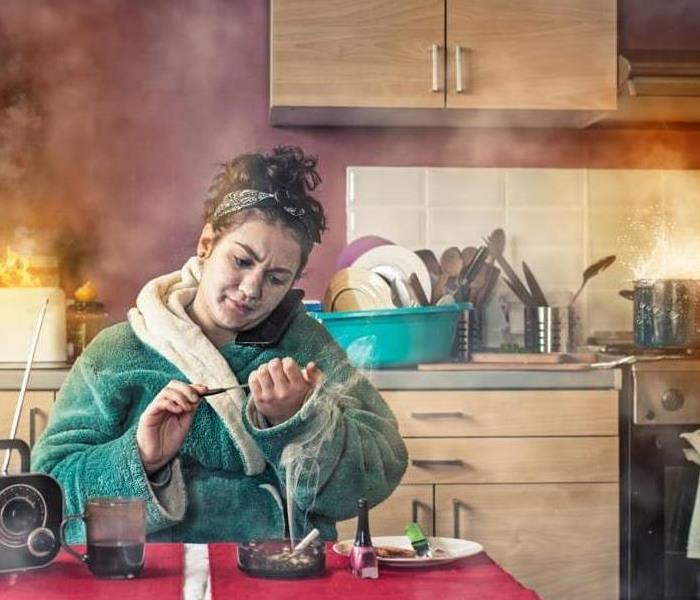 There are many causes of kitchen fires, including burning food, poor electrical outlets, and inattentiveness.

A kitchen can be a dangerous place if you are not cautious. Most of us cook every day in the kitchen and deal with various electrical appliances near a water source and heating elements.

Kitchen fires are usually how a home fire starts, so it can be very alarming when something catches on fire while you just want to fix yourself a meal. Here are the most common causes of kitchen fires so that you're prepared to avoid them.

Most Likely to Cause a Kitchen Fire

Taking your eyes off your food while cooking is not a good idea. Unattended cooking is the leading cause of kitchen fires, accounting for more than half of all home fires.

So, it is important to always stay in the kitchen when you're cooking. If you feel tired or out of it, this is one case when ordering takeout is not only the healthier option but the most responsible one, too.

Malfunctioning appliances or faulty wiring are the second leading cause of kitchen fires. Be especially careful with old appliances, as wires can become loose and break.

Electrical fires are especially dangerous because everyone's first instinct when dealing with a fire is to pour water over it. This is a big mistake because water conducts electricity!

The first thing you should do is unplug the appliance if it's plugged in. Then smother the flames with fistfuls of baking soda. If this didn't put out the fire, call emergency services immediately.

Make sure to properly maintain your electrical appliances so that this doesn't happen. A good habit to get into is not to overload circuits with too many appliances plugged in at once.

Candles are one of the leading causes of house fires, usually because people underestimate the damage they can cause. Lit candles, especially when left unattended, can set fire to the whole house.

Exercise caution with lit candles, especially near flammable materials like curtains or towels. It's also not advisable to put a candle in a drafty spot, like by a vent or a window, on a windy day.

Don't burn a candle for longer than 4 hours, and never leave it unattended. This is especially important if you have children or pets in the house.

Adding to the last point, kids often start kitchen fires by playing with matches or lighters they find around the house. A child's natural curiosity can put them at risk.

They're too young to know any better, so it's on the adults to supervise them and teach them about fire safety. Children are usually fascinated by fire, so they won't immediately call out for help if they accidentally cause one.

They associate fire with birthday candles and fireworks and don't realize how scary they can be until they potentially get hurt. They also tend to play with fire in hidden, enclosed places because they may have been told it's wrong. You can see how this can be disastrous.

If you have a child in the house, educate them about fire safety as soon as possible. Teach them about the dangers of fire, and that matches, lighters, and heating elements in the kitchen aren't toys.

Kitchen fires are scary, but once the damage is done, you'll want your old kitchen back. After all, a kitchen is one of the most useful rooms in a house.

We at SERVPRO have been doing fire damage restoration for years. Call us, and we'll make sure that not the slightest trace of smoke or soot is left in your home. We're available 24/7 to restore your home back to its unblemished state.